Understanding the columns/fields in Nutch 2.0 Webpage

GitHub LinkedIn Polywork
One of the great things about Nutch 2.0 and the move to GORA is that the datastore is much more easily accessible than it was under Nutch 1.x. In particular, if you are are using Nutch 2.0 with MySQL you can leverage your existing SQL knowledge and SQL tools to see what is going on in the background. This makes both learning and debugging Nutch 2.0 significantly easier than previous versions. In any case, as the goal of this article is to give a brief explanation of each column in the webpage table so that you can better understand what is happening when running Nutch, it is applicable to all Nutch 2.0 back end stores, not just SQL stores.

Before jumping in, it is helpful to quickly review how Nutch crawls the web and stores those results at a very high level as the steps of the crawl are linked to the columns in the webpage table. First, an initial set of seed urls are injected then there are repeated web crawling cycles. These crawl cycles consist of generate, fetch, parse and database update job steps. These steps use the various columns in the webpage table in the Nutch database. 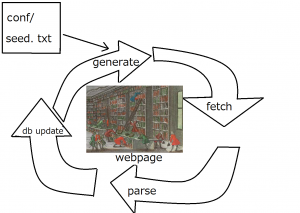 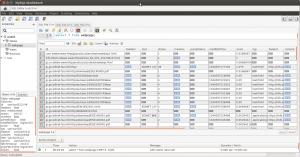 id - Generator Field. This is used as the index of the table and consists of the url in a slightly different order (reversed domain name:protocol:port and path) from the order normally seen in your web browser so that it can be searched more quickly. Nutch contains convenience utility methods such as for unreversing urls at TableUtil. Note that using a url as the primary key means the default Nutch 2.0 design is to keep track of the current state of the crawl universe. Nutch 2.0 is not designed for keeping an archive of pages over time as they change (at least without a little modification).
example: org.creativecommons:http/press-releases/entry/5064


text - Parse field that is a conglameration of various text fields for general search purposes. Given advances in Solr I suspect this is no longer really needed except possibly for performance reasons.
example:

modifiedTime - Fetch field - supposed to be last time signature changed (may have defect causing it to turn to 0 after multiple crawls).
example: 1344597206693

typ - Fetch field containing the mime type Internet_media_type for the document such as text/html or application/pdf. Note that some Mime types are excluded by default and this can be modified in conf/regex-urlfilter.txt.
example: text/html

baseUrl - Fetch field. The base url for relative links contained in the content. Maybe be different from url if the request redirected.
example: http://gora.apache.org/

title - Parse field - The text in the title tags of the HTML head.
example: Welcome to Apache Nutch™

reprUrl - Fetch field for representative urls used for redirects. The default behaviour is that the fetcher won't immediately follow redirected URLs, instead it will record them for fetching during the next round. The documentation indicates that this can be changed to immediately follow redirected urls by copying the http.redirect.max property from conf/nutch-default.xml to conf/nutch-site.xml and changing the value to a value greater than 0. However, this is not yet implemented for Nutch 2.0 at this time and every redirect is handled during the next fetch regardless of the property of http.redirect.max.*
example: http://www.apachecon.eu/c/aceu2009/sessions/136

fetchInterval - Fetch field containing default interval until next fetch in seconds (defaults to 30 days). See fetchTime field default explanation. Can be set at the url level when injecting so the field is necessary (see nutch_inject).
example: 2592000

prevFetchTime - Fetch field - previous value of fetch time, or null if not available. This is the previous Nutch fetch time, not to be confused with modifiedTime which is the time the content was actually modified. See fetchTime field default explanation.
example: 1347093015591

fetchTime - Fetch field used by Mapper to decide if it is time to fetch this url. See this link how-to-re-crawl-with-nutch for a well written overview. Also see the Nutch API documentation AbstractFetchSchedule. The default re-fetch schedule is somewhat simplistic. No matter if the page was changed or not, the fetchInterval remains unchanged, and the updated page fetchTime will always be set to fetchTime + fetchInterval * 1000. See DefaultFetchSchedule. A better implementation for most cases is the AdaptiveFetchSchedule AdaptiveFetchSchedule. The FetchSchedule implementation can be changed by copying the db.fetch.schedule.class property from conf/nutch-default.xml to conf/nutch-site.xml and changing the value.
example: 1347093160403

retriesSinceFetch - Fetch field counter for number of retries to fetch due to (hopefully transient) errors since the last success. See AbstractFetchSchedule
example: 2

signature - This parse field contains a signature calculated every time a page is fetched so that Nutch knows whether a page has changed or not the next time it does a fetch. The default signature calculation implementation uses both content and header as information for calculating the signature. For various reasons (etags, etc.) the header can change without the actual content changing making the default implementation less than optimal for most requirements. For those looking to save some bandwidth on current status crawl or those implementing archival crawling (requires more changes than just this) the TextProfileSignature implementation is more appropriate. The signature calculation implementation can be changed by copying the db.signature.class property from conf/nutch-default.xml to conf/nutch-site.xml and changing the value to org.apache.nutch.crawl.TextProfileSignature.
example (16 bytes): e1 f7 cc cc 49 7a 45 6b e7 fc 05 68 9a e8 ea 93

*Thanks to Ferdy Galema for comments on the marker and redirect.